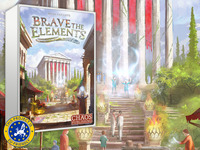 Discover a land of wonder where the ability to control the four elements—Fire, Air, Earth and Water—has become second nature. Conjure powerful disasters and infiltrate your opponents‘ societies while developing your own and defending it from harm.

Brave the Elements has been refined and balanced during its three years in development. Throughout that time, the game has been tried and tested by a large number of playtesters and gaming groups around the world.